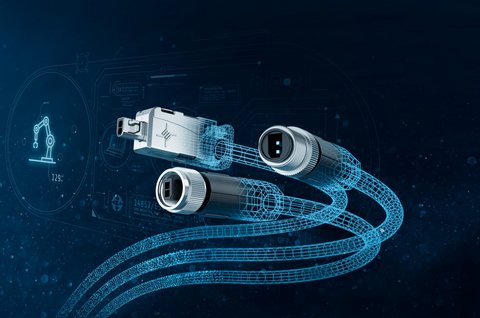 Fieldbuses have proven themselves for communication in automation applications since the end of the 1990s. They are still the most widely used bus system at sensor/actuator level in the manufacturing and process industry: easy to install, maintain and cost-effective. However, they have now reached their limits in the smart factory: they are not suitable for the requirements of the Industrial Internet of Things (IIoT), i.e. fast, continuous communication without interfaces from the sensor to the cloud. Therefore, according to the experts, Single Pair Ethernet (SPE) will establish itself in the sensor/actuator level as a feeder to the IP high-speed networks. The impetus for the development came from the automotive industry, where the first SPE solutions were presented in 2008. However, the technology also offers great advantages in factory automation, the process industry or building automation. In contrast to classic Ethernet, which requires up to eight wires due to the higher data transmission rates, SPE only requires one pair of wires. Instead of increasing transmission rates, however, long cable runs and miniaturisation are required at the industrial field level. And with 10 Mbit/s at a transmission length of up to 1,000 m and up to 1 Gbit/s at a transmission length of 40 m, SPE is perfectly adequate even for sophisticated sensor technology.
In order to establish SPE in the markets, an alliance of interests was founded at Hannover Messe 2019, from which the Single Pair Ethernet System Alliance emerged in April 2020. The association currently brings together 33 companies. The organisation deals with the entire SPE ecosystem and the open questions that exist in this context. This includes not only physical components such as cables, PHYs, connectors, sensors or switches, but also topologies, standardisation projects, tests and use cases.
From theory to practice

Since the merger, the member companies have been extremely active: in a first step, they played a major role in the development of the internationally standardised connector faces according to IEC 63171-2 for protection class IP20 and IEC 63171-5 for M8 and M12 (protection class IP67). The IP20 and IP65/67 connectors have a uniform mating face: an IP20 patch cable fits into an M8 or M12 connection without an adapter. "The mating face according to IEC 63171-2 is the most compact of the entire series of standards and thus absolutely meets the demand for miniaturisation," explains Verena Neuhaus, Manager Product Marketing at Phoenix Contact. "Compared to the RJ45, a doubling of the port density is possible, which means that significantly more compact device designs can be realised." Phoenix Contact has now also developed corresponding device and cable connectors for single-pair Ethernet for factory automation, process automation and building automation. The standardised interfaces according to IEC 63171-2 and IEC 63171-5 are ideal for office and industrial environments. The portfolio includes both pre-assembled patch cords and compact device connectors for the reflow soldering process in various designs.

The portfolio in the M8 design also includes pre-assembled patch cords with different cable types for various applications. The use of standard M8 components offers the device manufacturer the advantage of simple design and flexibility in cabling. Existing enclosure geometries and panel feed-throughs can be adopted and fitted with new SPE inserts. The inserts are available in straight and angled versions and for different soldering methods (THR and SMD). Verana Neuhaus: "In addition to the SPE connectors already available, Phoenix Contact is developing new components in the M12 and M12 Hybrid designs. We will present the first prototypes of the SPE M12 connectors at the SPS."

SPE also offers advantages in the field of building automation, as Matthias Gerber, Market Manager LAN Cabling at Reichle & De Massari AG (R&M) explains: "SPE is ideal for connecting a wide range of applications in building automation to the data network." Especially in so-called digital-keiling zones, between the service outlet (SO) and small IoT applications, SPE offers diverse and new possibilities. Gerber: "The ISO/IEC 11801-6 standard already allows the use of application-specific cabling after the service outlet. This lays the foundation for a solution for the network connection of light, temperature, smoke or air sensors or of controls for windows and blinds." With SPE, Ethernet/IP communication in building automation and in the industrial environment can be extended to the sensor-actuator level, replacing a large part of fieldbus applications. Matthias Gerber: "Countless end devices can then be integrated directly into the Internet of Things (IoT) without costly gateways and controlled via an IP-based, digitalised building management system."

R&M has developed a complete cabling system based on two SPE connector types for this purpose: LC-Cu (IEC63171-1) and MSP (IEC63171-2). R&M uses insulation displacement connection (IDC) in both SPE connector systems. Operated with the 10BASE-T1L protocol, the R&M cabling system achieves transmission distances of up to 600 meters. SPE: Transferring data and energy The development of the single pair Ethernet originated in the automotive industry. Thomas Keller, Project Management Medical & Industries at Rosenberger and Board Member of the Alliance: "Today's vehicles are microcosms of connectivity in which electronic devices are connected to in-vehicle networks. This is the only way to realise autonomous driving in the future." For this reason, the automotive industry has been using Rosenberger's MTD and H-MTD connector series for years. "It's similar in industrial automation," says Thomas Keller: "Extreme conditions, such as large temperature ranges to be covered, shock and vibration, IPx protection against dust and moisture, as well as miniaturisation, play an important role in the design of the connection technology." Rosenberger supports future automation solutions for Industrial Ethernet applications with the RoSPE-HMTD and RoSPE-Industrial (IEC 63171-2 and -5) connector series, which will also be shown at SPS.

Marcel Leonhard, Head of Business Units ICT & DCF at Telegärtner Karl Gärtner GmbH is also looking forward to the trade fair in Nuremberg: "After presenting ourselves as an Alliance for the first time two years ago at the SPS trade fair 2019 in Nuremberg, we now finally have the opportunity at this year's SPS to present what we have achieved in the meantime to the general public." On the technical side, Telegärtner, like the other Alliance partners, has developed SPE connectors for both the IP20 and IP67 ranges, which will be presented at SPS. But at the same time, as Marcel Leonhard emphasises, the System Alliance has also further developed the SPE system as a whole: "Because in addition to the connectors, the cables naturally play an equally important role in the system. But before you can connect cables and connectors, especially with SPE, you have to test whether both are compatible and work." This is because the market offers a wide range of cables such as AWG 22/1 to AWG 26/7, all of which comply with the SPE cable standard IEC 61156, but which have to be matched with the connectors. Marcel Leonhard: "In the Alliance, the connector and cable manufacturers have therefore worked together, matched the suitable products and tested them in round-robin tests. After all, our goal as SPE System Alliance is to advance not only individual products, but the complete system." In addition to the space and weight reduction, the installation of the components is another advantage. Marcel Leonhard: "The field-terminable connectors are particularly suitable if the length of the cable route cannot be defined in advance and the cable length has to be determined flexibly on site. Likewise, not only stranded conductor cables but also solid conductor cables can be connected - and without special tools."

Simon Seereiner, Head of Product Management SAI & IE at Weidmüller, explains another major advantage of SPE technology: "In addition to data, power can also be transmitted via the two-core cables." With Power over Data Line (PoDL), up to 60 W can be fed to an interface with simultaneous data transmission (100 Mbit). Seereiner: "That is sufficient for most sensor applications. This makes it possible to build up sensor systems in industry cost-effectively, simply and with a high packing density, which leads to increasing degrees of automation and networking and to realising ever more highly automated processes." With a clear focus on industry, Weidmüller has implemented connectors of the IEC 63171-2 variant for the IP20 environment and the IEC 63171-5 variant for the IP67 environment. With a focus on cross-sections in the AWG 26 to AWG 22 range, particularly user-friendly connectors have been created, which are realised both as patch cables and freely configurable variants and will be presented at the SPS.

With a pitch of 7.62 mm, the compact connector is only half the size of an RJ45 connector, so that ten SPE connectors can now be connected to devices that previously had five RJ45 connectors. The space saving of the connectors is a big advantage but, according to Simon Seereiner: "A much bigger advantage of SPE is that thanks to the transparent architecture, the machines can be controlled and operated much more efficiently. This saves enormous costs in parameterisation, in commissioning and in the execution of the work. In a simulation we did, we were able to reduce operating costs by 18% by using SPE." So the SPE System Alliance does not stand for a specific connector system or product; rather, its activities are directed at the entire future SPE ecosystem. The Alliance's successful work has led to TIA's Single Pair Ethernet Consortium (SPEC) and the Single Pair Ethernet System Alliance recently joining forces to jointly educate the global market on the benefits of SPE technology.

At the same time, the Alliance enables participating companies to more rapidly build the expertise needed to implement Single Pair Ethernet in products more quickly and reliably. "These partners are on a mission to bring Single Pair Ethernet to the market as an end-to-end infrastructure," says Simon Seereiner of Weidmüller. And Verena Neuhaus from Phoenix Contact adds: "The SPE Alliance and its members are driving the technology as a whole - and that includes much more than a connector."